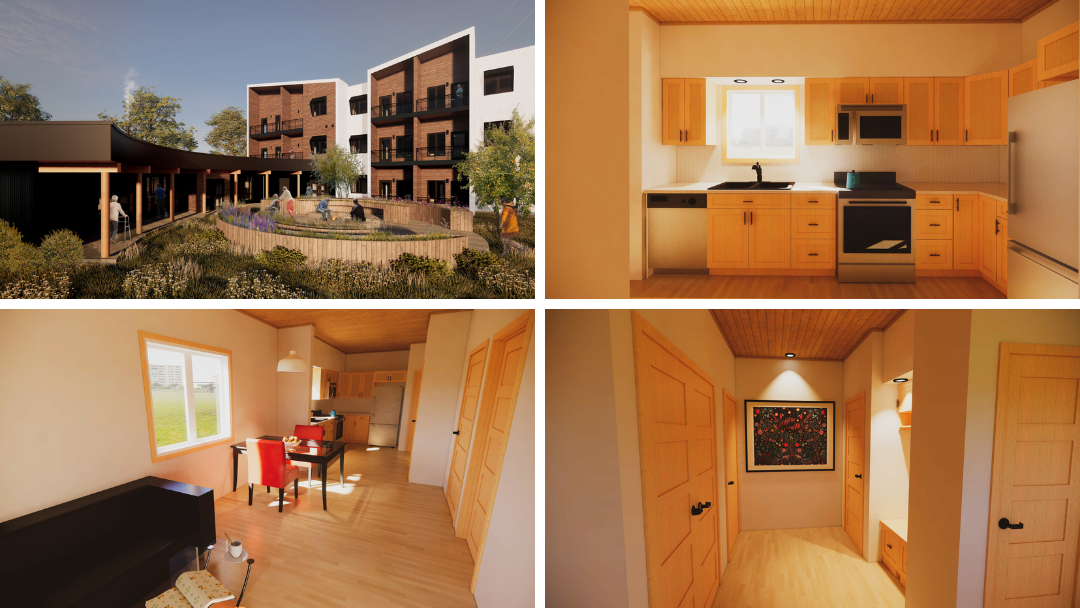 The creation of the Round Prairie Elders’ Lodge was a collaborative process through and through, says Jason Surkan with David T. Fortin Architect Inc. (DTFA), and it started with the Elders who might live there.

“We had community engagement sessions with elders to ensure their visions and hopes and dreams were captured in this project,” Surkan said. “Hopefully what we brought forward in terms of the architecture of the building is their vision brought into reality.”

In early 2020, before COVID hit the province, Central Urban Métis Federation Inc. retained Medicine Rope Strategies to lead an engagement session with the Elders. Hopes, ideas and dreams for the project were shared that would forever shape the development of the project.

From there on out, it was up to DTFA, Big Block Construction and modular builder Grandeur Housing to work together to make those dreams a reality.

DTFA oversaw the amenity portion of the building, which will be stick built, and were involved in helping with the design of the modular built portion.

Surkan said modular builds are a different way of building than DTFA is used to.

“There are certain efficiencies with modular building that we can’t really achieve with site building in terms of cost and time,” he said. “But there’s a lot of coordination that needs to be done.”

There’s especially extra coordination that needs to be done where the modular build meets the site build. Surkan said there were a lot of conversations about how to marry those two buildings.

“We had really good weekly project meetings and everyone got along really well,” he said.

‘We have to make sure we're all on the same page’

John Rempel, Grandeur drafting/design manager, said it’s nice to work in a group like that.

“You’ve got a lot of people to lean on,” Rempel said. “Everybody has some expertise and it’s nice to have that input from all those angles.”

The teams were situated across three provinces, Big Block in Saskatchewan, Grandeur in Manitoba and DTFA in Ontario, so there were a lot of video calls, but Rempel said it worked out really well.

“The biggest thing is to communicate, make sure everybody is communicating, sharing drawings back and forth.”

“We have to make sure we're all on the same page. …  If somebody decides they want to move something, like rotate an elevator for instance, that has ramifications on the whole rest of the building.”

From mechanical to plumbing, heating, and ventilation — all of the modules are self-contained and fully finished with appliances installed.

“You want to make sure you have everything in place beforehand,” Rempel said. “We’re drywalling, painting, putting in carpet while they’re still working on the foundation. On a typical site build, usually if they’re doing the foundation, you could still be working on design changes.”

Of course, there are always surprises in constructions and slight adjustments are still possible.

This project has an elevator with it which is another challenge for a modular build, though the Big Block team and Grandeur have been involved in projects with elevators before.

The Round Prairie Elders’ Lodge has a large stick build portion, which was a new element for Big Block as our previous projects have typically been exclusively modular builds.

“What you design in the factory can be great but it’s really important that it integrates with what’s done on site,” said Ben Miller, Big Block chief operating officer.

Each module built in the factory needs to fit perfectly with the module it will be placed next to, and in this case, with the stick frame portion of the project.

“When you’re building everything framed out, an electrician can run all his wires wherever he wants, but when it’s in the factory, it’s all done and buttoned up and we can’t see anything behind the walls.”

More preparation and thought needs to be put into the design components up front when using modular construction techniques.

The stick build portion is for the gathering space, which includes a spiritual space for smudging or prayer and an open gathering space with a fireplace.

Incorporating cultural aspects into a building was also a rewarding learning experience for the Big Block team.

Ben Miller, Big Block chief operating officer, said they were honoured to have DTFA on board to lend their expertise about culturally appropriate design.

“They were able to capture which elements of the design would tie in well for CUMFI and the Métis culture.”