Designing with culture in mind: Building a home for Métis Elders 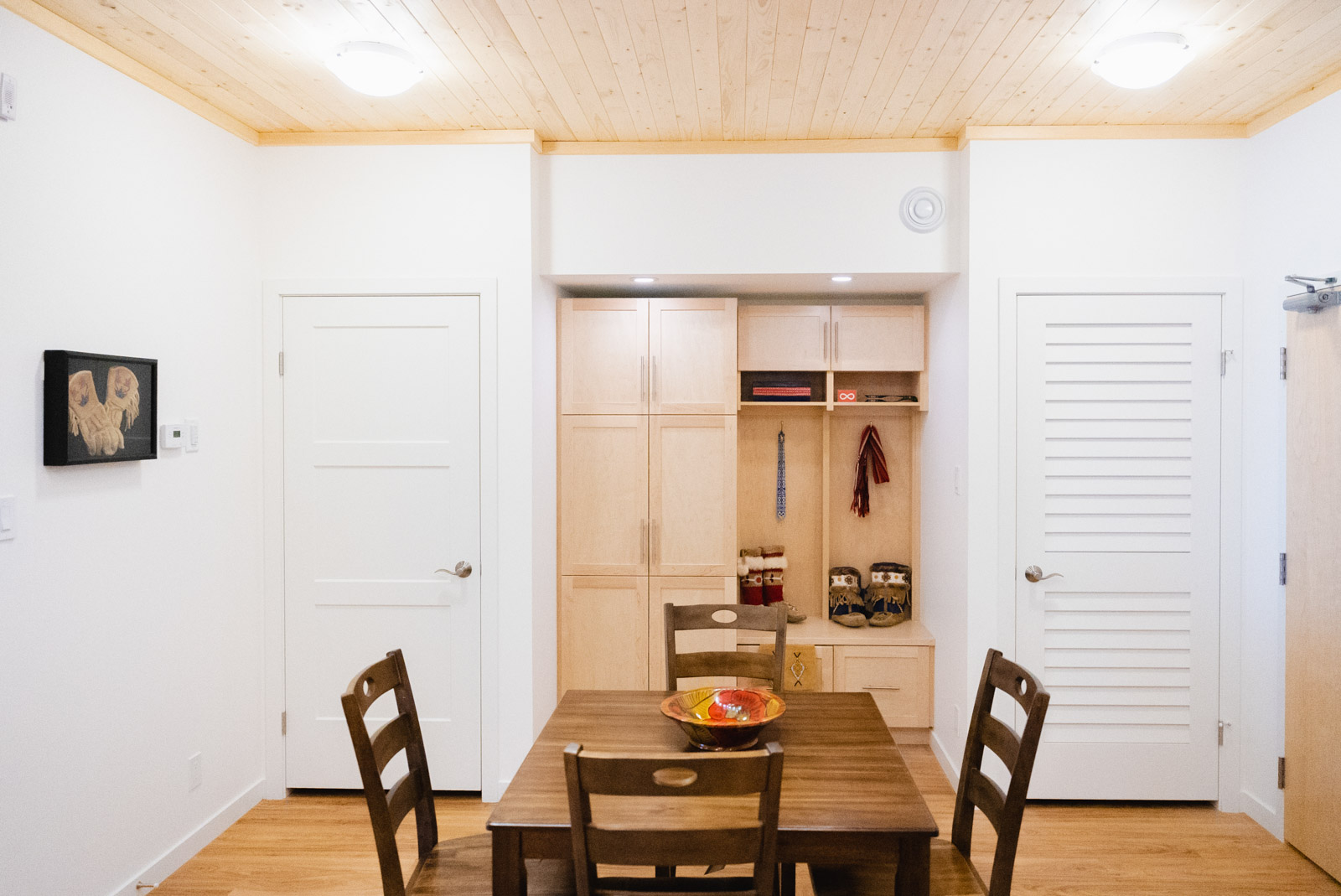 Architect David Fortin wanted to ensure there was outdoor space when designing the Round Prairie Elders' Lodge, a multi-unit residential building for Métis Elders from the Central Urban Métis Federation Inc. (CUMFI).

“Initially, the building position on the site didn’t allow for outdoor space and given our own experience working with Indigenous communities and Elders, we knew outdoor space would be important,” he said.

They rearranged the site and created a southern facing courtyard with a fireplace outside for sacred ceremonies, surrounded by a garden with plants for traditional medicines.

The fireplace inside follows a radial grid across the ceiling that connects to the sacred fire outside, and there’s a spiritual room in the building that residents can use to smudge or pray.

“I’m hoping some jigging will be going on by the fireplace someday,” Fortin said. “We’re trying to honour the sacredness and the traditional ways of the Métis people.”

Fortin is the principal architect of David T. Fortin Architect Inc. Raised in Prince Albert, he’s currently living in Sudbury, Ont., and working as the director of the Laurentian University McEwen School of Architecture — the first Indigenous person to direct a school of architecture in Canada.

He’s also done extensive work studying Indigenous design. He’s a member of the Royal Architectural Institute of Canada Indigenous Task Force that seeks ways to foster and promote Indigenous design in Canada, and acted as design architect (with Edwards Edwards McEwen Architects) for an addition and renovation to the Gabriel Dumont Institute in Saskatoon.

Jason Surkan also worked with Fortin on this project; born and raised near Prince Albert, Surkan has a Masters of Architecture from the University of Manitoba and worked as a graduate research assistant for Fortin studying Métis architecture.

Fortin said growing up as Métis in Prince Albert has given both of them a personal investment in the project.

“We’ve lived it,” he said. “We’ve spent a lot of time with Métis community members and Elders over the years, so this is a continuation of what we’ve already been doing.”

Engaging with the community has been a core part of the project from the beginning.

CUMFI and Fortin worked with Medicine Rope Strategies to organize engagement sessions to sit down and visit with the people who could be living in the building.

“A big part of designing these projects is to listen to what people say and what they want and make sure you’re creating something that works for them and inspires them,” Fortin said. “This has to involve the community.”

One of the elements that came out of conversations with Elders was to put the community garden at the centre of the building. The garden will feature cherry, plum, and apple trees as well as saskatoons, haskaps, raspberries, and gooseberries. The varieties chosen were developed by the University of Saskatchewan to be hardy in Saskatoon’s Zone 3 climate.

Jason Surkan said he wanted to encourage a sense of community with the garden.

“Visiting happens while you’re berry picking, hunting, gathering, fishing,” Surkan said. “I wanted to bring that into the urban context as much as I could, understanding they’re still in the city.”

The original plan was for the building to have the parking lot on the south side of the building but DTFA came in and flipped that around to shield Saskatchewan’s prevailing north west winds and give the courtyard and community garden that southern sunlight.

“It will create a micro climate for the Elders to sit in and enjoy the sun and be out of the wind,” Surkan said.

Fortin said this is the first time he and Surkan have worked on an affordable multi-residential housing project, and they were impressed by Big Block’s ability to coordinate the funding sources and applications that made the project possible.

“We want to make it an amazing cultural centre for Métis people but you have to work within the parameters of the project,” Fortin said. “Big Block knows what they’re doing when it comes to providing affordable housing and pushing the envelope.”

Thoughtful down to the last detail

For the Round Prairie Elders' Lodge, Fortin took inspiration from the traditional homes the Métis were building in Batoche and around the province.

Even the smallest details were taken into consideration. For example, many houses have doors with crown moldings and intricate panel details; these are called Colonist doors and it is an aesthetic that comes from Europe.

“That would be inappropriate for this project,” Fortin said. “We always want to be critically aware when we’re doing projects for an Indigenous community.”

Instead, they went with Shaker style doors and cabinets, which still have a European influence but they’re more utilitarian, which Fortin and Surkan felt was better aligned with this kind of project.

Fortin said the Round Prairie Elders' Lodge will honour the culture and the Elders living there.

“A lot of the cultural traditions and the way Métis people did things was discontinued and certainly not expressed in the built environment. It’s important to celebrate that, and it strengthens the identity of Métis people and gives them a sense that their culture is valued in the city where they live.”

He hopes the Elders' Lodge will become not only a centre for Métis culture in Saskatoon, but a source of pride for the community because Indigenous people have been involved in the project from start to finish — Big Block is working to ensure there are Indigenous contractors working on this project.

“We’re at a point where Indigenous voices are not just celebrated but prioritized. We’re past the age where there was a perception that Indigenous communities needed everything done for them,” he said.

“Many different people from the community have been involved from the beginning. …Hopefully it creates a community identity and a sense of ownership that will continue to grow over time.”