Breathing life into the Home Fire: Indigenous engagement in a rapid housing project 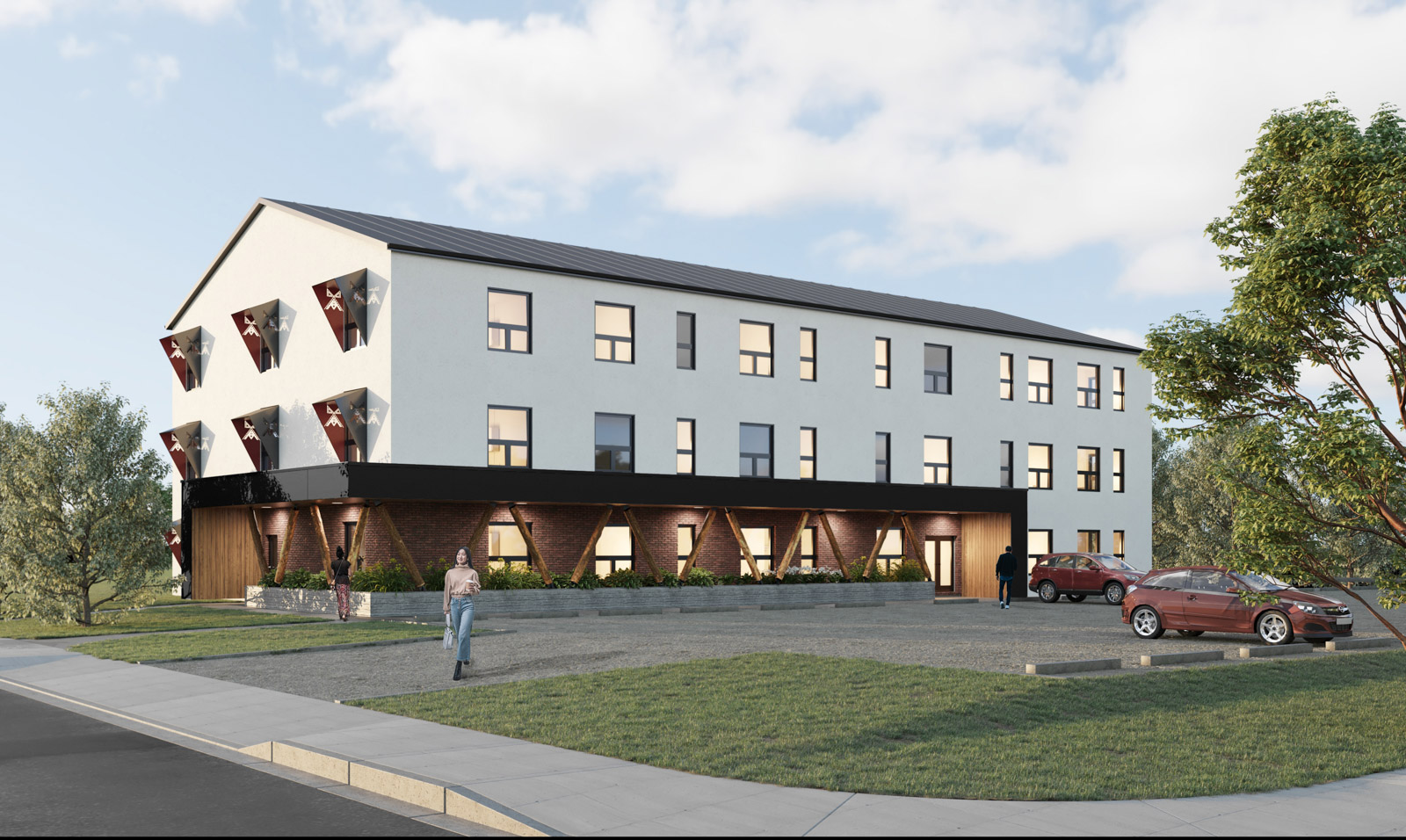 Architect David Fortin says translating Indigenous thinking and knowledge into contemporary architectural form is still a relatively new conversation, so when designing for an Indigenous client, he and his team put a lot of emphasis on engagement.

“Some of the clues come through spending time in communities over meals, informal conversations; Elders might tell you a story that becomes this really incredible inspiration,” David said.

“It’s kind of like a campfire when you blow on the fire to get it going — the community breathes that fire into it.”

The latest project that David is working on with Big Block is the Silver Sage Housing Corporation’s Home Fire building in North Regina. Home Fire will be a transitional place for people in need of immediate housing, and it’s part of the federal government’s Rapid Housing Initiative (RHI) in order to get those people the housing they need as quickly as possible.

Silver Sage is collaborating with Regina Treaty / Status Indian Services (RT/SIS), which will be operating the programming that will serve the people living there. Both Silver Sage and RT/SIS are entities under the File Hills Qu’Appelle Tribal Council.

RHI projects must be completed no more than 12 months after agreements are signed, which means designers and architects like David and his team have a very limited amount of time in which they can engage with the client.

“Engagement takes time and investment — it’s not something that should be rushed,” David said. “What we can do, though, is try to listen to what we hear … and try to make a building that celebrates their communities in the best way we can.”

Big Block’s process enables rugged collaboration in new construction projects from the start, and Rapid Housing projects with tight requirements for turnaround time are no exception.

“Home Fire is a living example of how integrating intentional engagement, even when accelerated, allows generous opportunities for co-creation,” Nick Sackville, VP Community Development with Big Block said. In turn, architects and housing providers are better equipped to bring more relevant and beautiful buildings into the community.

‘It changes the feel of the building

David and his team worked with artist Linda Obey-Lavallee to bring in meaningful design elements to the project. In addition to choosing the paint colours that will be used on the interior (a warm orange palette to reflect the Home Fire), Linda created a hand-drawn design for the sun shades that are based on the tipi and the geometry used on ribbon skirts and gave input into the angled posts on the corner of the building, which represent tipi poles. She’s also working with the team to develop artwork for the room number signs.

“It changes the feel of the building being able to work with Silver Sage on these aspects,” David said. “Their team has been able to guide us as much as they can in this rapid build.”

He and his team, including intern architect Jason Surkan, have been meeting with the client group to get their perspectives, including a one-day gathering to hear from stakeholders and potential residents that Big Block helped to arrange.

“We feel much better about the project having been able to do that because people were able to voice their thoughts about the building,” David said. “And that's so important, because there were people there who are going to live in the building, there were Elders and other community members from that region, so that does breathe a little life into the project.”

His long-term vision to address the challenge of engagement is to help build capacity and see more Indigenous people working as architects and designers.

“There will be an Indigenous design community in all of our cities that will be able to mobilize around these things a little bit quicker than having outsiders come in and try to learn what's important and what's not.”

‘Investing in the next generation’

Building capacity is also the goal of Stone and Arrow Consulting, which is providing engineering consulting services on the Home Fire project.

Stone and Arrow is a partnership between File Hills Qu’Appelle Developments and Stantec Consulting Ltd. (Stantec) — allowing Stantec to share its technical capabilities with the FHQ Developments’ local knowledge and experience.

Mark Griffiths, Senior Principal of Energy & Resources Saskatchewan for Stantec and Director with Stone and Arrow Consulting, said the goal is to create an environment where the partnership brings Indigenous professionals into the workplace.

His involvement with Stone and Arrow came about through his own personal journey of reconciliation. It was during that journey when he met Thomas Benjoe with FHQ, who at the time was making a keynote speech at a SIMSA event and who is now the President at Stone and Arrow.

“At that speech, I found what Thomas had to say very inspirational,” Mark said. “He talked about his visions for investing in the next generation and generations beyond, and I felt that that aligned with what the expectation of my journey of reconciliation should hold for me.”

They spent time getting to know one another and understanding how their values and visions aligned, which ultimately led to the development of Stone and Arrow.

The new partnership has already exceeded expectations, expanding its service offering beyond what Mark initially thought the company would provide.

Thomas Benjoe, who is now the President of Stone and Arrow, says FHQ Developments has been very selective and deliberate in finding partners that help to achieve the vision of building indigenous capacity.

“Our vision cannot be achieved without the help of great partners that are committed to helping us grow a new company like Stone and Arrow together,” said Thomas. “Our companies are focused on growing impact for our community and building capacity is one of the many ways we accomplish this.”

‘A place people are proud to go home to’

Architect David Fortin and his team worked with Big Block previously on the Central Urban Métis Federation Inc. Round Prairie Elders’ Lodge in Saskatoon, and that experience working together has allowed the team to repeat successes learned from the first project — and revisit tactics that didn’t work.

“Having people who are experienced in doing this is a major advantage for everyone,” he said. “You can't reinvent the wheel on every project if you're trying to do something fairly straightforward with very modest expectations. … Big Block and us, within that modesty, we all want to believe that we can do something that is a place people are proud to go home to.”

He says both for himself and his team— and team at Big Block — there’s a sense that these buildings can provide very meaningful, direct outcomes on improving people’s lives.

“These buildings are going to play a central role in improving people's quality of life. And if that can help strengthen cultural ties and community ties in that process, then that's already a meaningful project.”