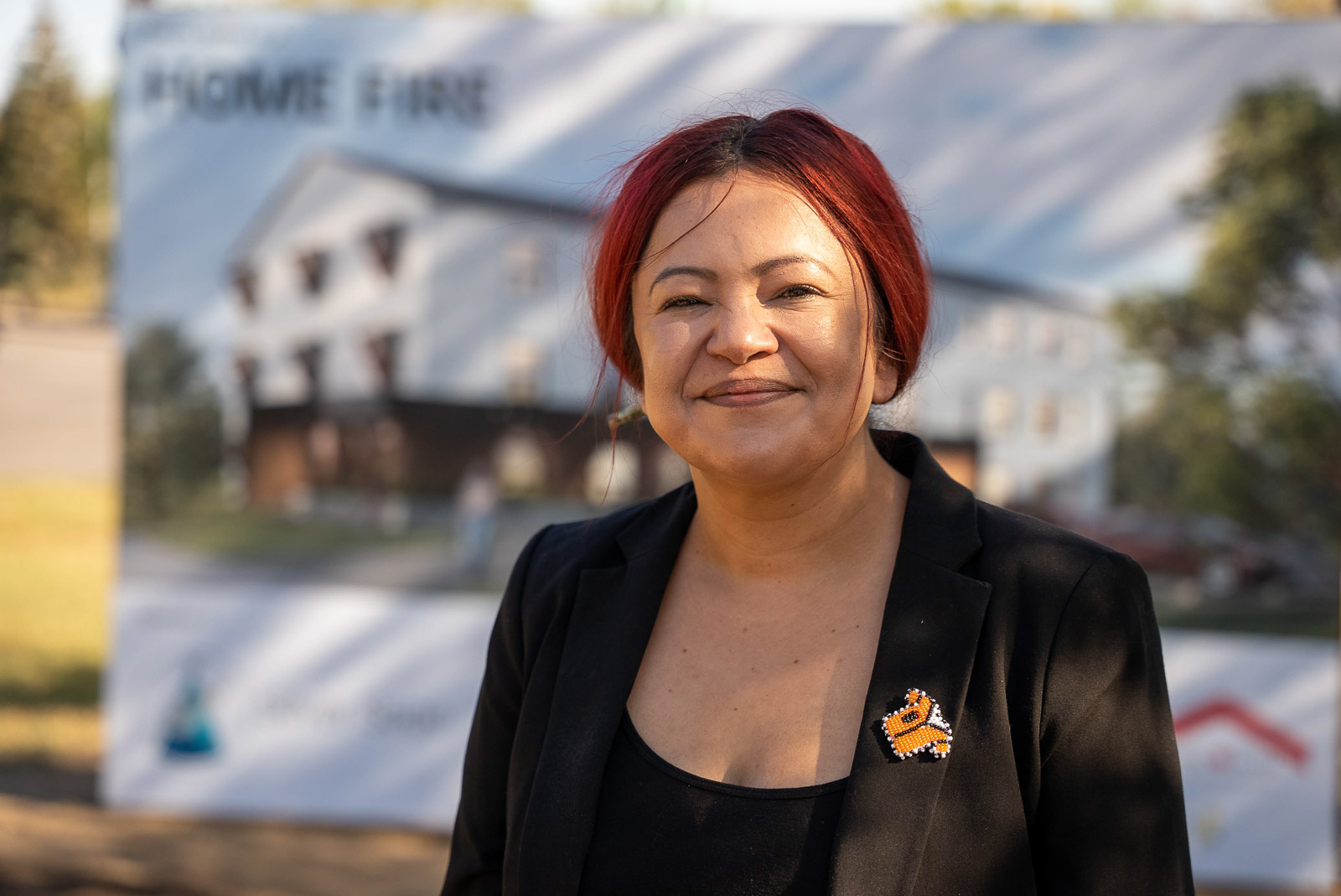 “Housing is interconnected to everything — it’s the foundation to family and community,” says Natoshia Bastien, Silver Sage Housing Corporation president and CEO.

Natoshia has been working in the housing industry for more than 20 years, with most of her career spent specializing in Indigenous housing programs and community development. She joined Silver Sage in October 2021.

“I’m very passionate about the structure we call home and what it represents,” she said.

A leader in both her company and her community, Natoshia is just one of the strong female leaders Big Block is working with for current and recent projects — and she said it’s a trend she sees growing.

“When I first started working in housing, it was a male-dominated industry, but it’s flipped and you’re seeing a lot more women joining this industry,” she said. “Traditionally, it was the women’s role to keep our home fire going. It was the women's role to build the structure, to ensure it was a place where the family could grow.”

Big Block is working with Silver Sage to complete the housing corporation’s latest project: Home Fire, which will provide transitional housing to people in need along with support provided by Regina Treaty / Status Indian Services (RTSIS).

It’s not the first transitional housing Silver Sage has provided, but it is the largest facility with 29 units.

“I’m enjoying working with Big Block,” Natoshia said. “I love the enthusiasm of the team. … I can feel the passion. I know that through collaboration, we’re going to end up with a great structure for the programmers to go in and house people and deal with their challenges.”

Silver Sage owns and manages more than 560 rental properties throughout southern Saskatchewan, with the majority of the homes in Regina. It’s owned by 15 First Nations who are shareholders. It’s been operating for nearly 40 years, providing Indigenous people in urban areas with rental housing opportunities.

“Homes are a culturally sacred space,” Natoshia said. “That’s where we go to retreat from the outside world, to rest, to grow with our families. It’s both a social safety net and economic driver.”

Cara Bahr, CEO of YWCA Saskatoon, is well aware of the importance of people having a safe place to rest and repair.

The YWCA has four distinct business units: Fitness on 25th, the Child Development Centre, the Employment & Learning Centre, and the Crisis Shelter & Residence, which provides services and housing for women who are precariously housed, or fleeing violence or trauma.

The organization currently has 34 crisis shelter beds, 10 long-term supported housing beds, four supported beds for women with intense mental health issues, and six beds for youth who are wards of the province — but it’s not enough.

“We didn’t have room,” Cara said. “We are at max capacity all the time. As an organization, we need to do better for this community.”

Big Block is helping YWCA Saskatoon with an expansion of their Crisis Shelter & Residence. The units will house larger families comfortably, and will provide a more homey feel with a private kitchen in the units. The number of units and exact details about what they’ll be offering is still being determined as the project is in the fundraising stage.

“Big Block does remarkable work,” she said. “They genuinely care. They take the time to get to know the organization and the challenges you face. They’re with you every step of the way.”

Cara joined the YWCA in 2020, and says she enjoys being an advocate for women.

As with Natoshia, Cara sees more and more women leading housing initiatives in the community.

“I think the reason women are coming to the forefront now is because women have to be better than their male counterparts — they have to go above and beyond and excel and exceed,” she said. “They fought hard to get there and they feel the need to remove barriers for other women in their wake.”

A mission to make change

Another organization Big Block has worked with that is led by a strong female leader is Central Urban Métis Federation Inc. (CUMFI).

Shirley Isbister started with CUMFI in 1998, and has seen the organization take on numerous housing projects, the first being Infinity House in 2001 — a 16-unit transitional home for women that’s still in operation today.

“I grew up in poverty,” she said. “When we first opened Infinity House, and I was watching them put the sign up, I had tears rolling down my cheeks. And my thought was, if there had been services like this available when we were young, how much would that have changed our life?”

Since then, they’ve continued to grow the housing programs they offer.

“We always knew that housing was one thing, but families needed supportive housing,” Shirley said.

All of the housing they offer includes wraparound supports to empower and uplift residents. They have 12 buildings offering a huge variety of support for residents, giving program participants the tools they need to make change in their lives.

Helping people make change has been a driving motivation for Shirley throughout her life, she said, and her mission started with encouragement from a woman who had a big impact on her as a child: Virginia Wall from the Ministry of Social Services, who encouraged Shirley’s mom to ensure she was educated.

“She told my mom that she needed to support me because I was going to be able to make a change,” Shirley said. “My motivation all through has been to make change for our children and our Elders.”

The most recent housing project CUMFI completed with Shirley at the helm was the Round Prairie Elders’ Lodge — a three-storey apartment complex where older Métis folk can live affordably and reconnect with their heritage.

They worked for 20 years to get the seniors’ residence up and running, and then three years ago, all of the pieces started to fall into place. The first Elders moved in Dec. 1, 2021.

“My total belief is that when it's meant to happen, the Creator will bring the right people together,” she said.

Big Block helped CUMFI with the Lodge, and now the two organizations are teaming up again for a new project called CUMFI Community Homes that will be supporting women and families, with residents expected to move in this November 2022.

While she’s been with CUMFI for 24 years, she says retirement will only come when she wakes up in the morning and doesn’t have the enthusiasm to tackle whatever challenges she will face that day. The fact that she was in the office at 7:15 a.m. the day we spoke to her suggests she’s not ready to throw in the towel yet!

“I live by the quote: the speed of the leader determines the rate of the pack,” she said. “I don’t expect staff to do anything that I'm not prepared to do. We have very challenging work.”

Fall call for proposals still open for Indigenous Shelter and Transitional Housing Initiative
Articles
Learn more
Breathing life into the Home Fire: Indigenous engagement in a rapid housing project
Articles
Learn more
breaking news
While Big Block is busy building like Bigfoot...
Read also: blurry in photographs and causing double-takes when our beast of burden, the crane, makes a flash appearance in the outside world. You can scout for more evidence of our expertise in community-minded housing development through our archive of multi-family and mixed-use residential construction projects.
LIVING PROOF