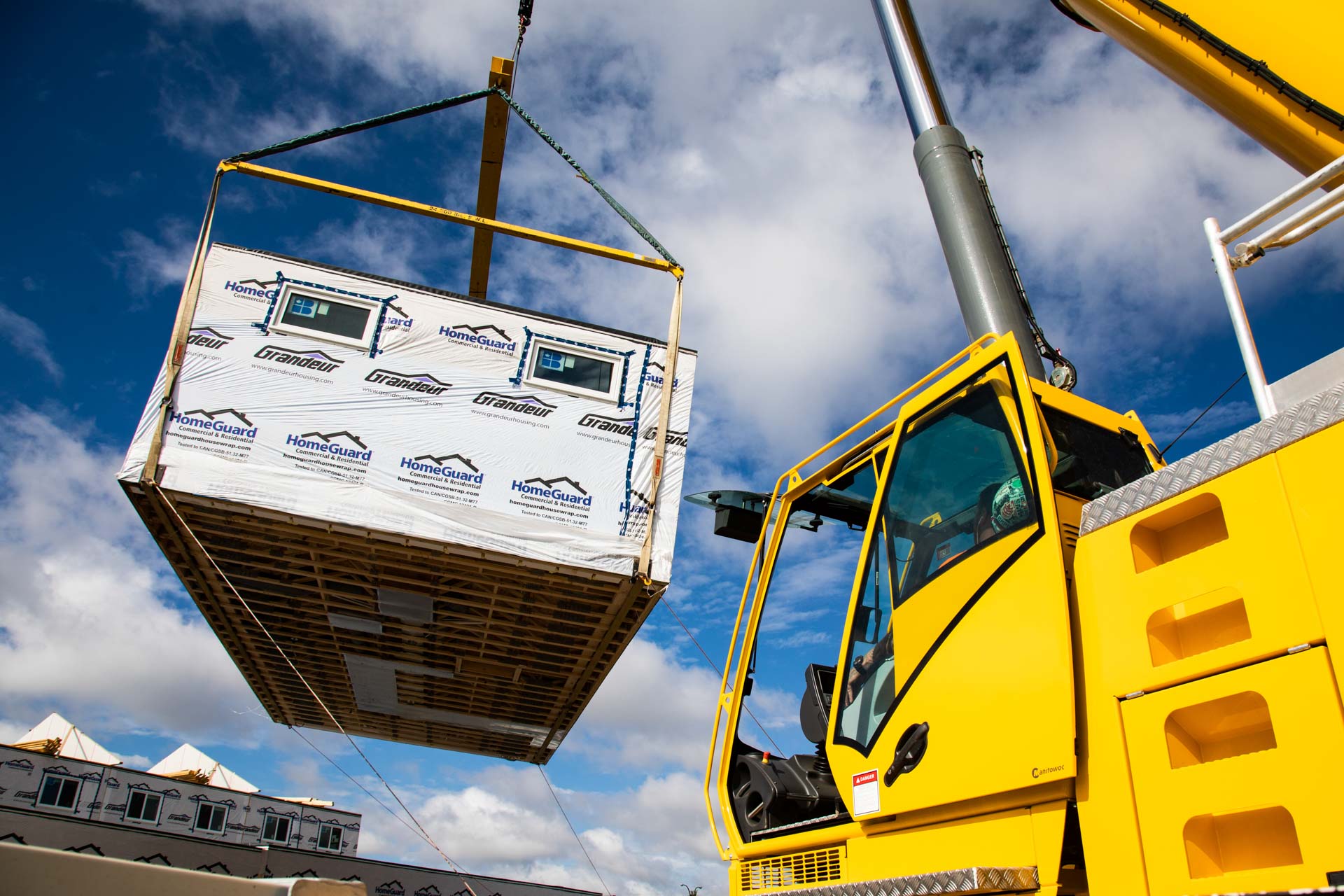 Seeing a modular build come together is an amazing sight: A building seems to almost magically appear in a day! If only it were as easy as waving a wand — in reality, it takes a community of well-coordinated workers to make it happen.

First, the modules needed to make their way to Saskatoon from the Grandeur Housing factory in Winkler, Man., taking our long-time haulers Spiegle Transport four trips in total to ship all the Net Zero Ready modules to Saskatoon.

For the National Affordable Housing Corporation Willowview Heights project in Saskatoon, the first three trips had two trucks carrying four modules, and the last trip — the day before craning — had three trucks with six modules. Those three trucks then stuck around to be used on craning day to bring the modules from the staging area to the site.

Before the craning can begin that day, the modules need to be stripped of the protective wrapping used during transportation.

“They have to be fast, like NASCAR,” he said. “As soon as the truck gets on-site, the pit crew jumps on and starts removing the extra pieces of plywood and straps underneath.”

Trucks roll in with modules throughout the day, and everyone on-site needs to keep up with the deliveries.

“It’s exciting and extremely fast-paced,” Colin said. “We don’t stop until the last module is done.”

Colin describes it as a “well-organized circus,” with all the different trades on site in a multitude of roles to make it all come together.

A site may seem to have a fair amount of room but once you add the crane, the modules, and the trucks coming in, suddenly the site becomes pretty small, and keeping everything organized is of utmost importance.

It usually takes 10-20 minutes to crane a module, so a 12-plex like the Net Zero Ready building usually takes about seven hours to complete.

Craning day can cause a disruption to the neighbourhood, with no parking on the street and having to temporarily block the street while the modules arrive, but Big Block makes sure the nearby residents are well-informed and aware of the process. Thankfully, these large disruptions are only for one day for each building instead of continuous disruption throughout the duration of the project.

Once the modules are in place, the joints have to be sealed and weatherproofed, and the framers jump in to start on the roof and back porches. The next day, the landscape crew starts their work.

Only so much work can be done before the modules arrive, so once they’re in place, the site gets busier. Thanks to the hard work of the crew at Grandeur, the interiors of the modules are almost completely finished by the time they arrive on-site, and within a few weeks, the buildings will be ready for people to start moving in.